Tagine! It’s a way of life in Morocco and you’re going to love it! Chicken Tagine with Olives is the way to my heart!

Let’s start with the basics. Tagine, is a dish that originated in Northern Africa and has since made its way across Europe and beyond. It’s particularly popular for dinner parties because it feeds a crowd and it’s incredibly flavorful. At it’s core, a tagine is large chunks of stewed meat, tons of spices, preserved lemons and fresh herbs on top. It’s cooked in a vessel that’s also called a tagine. It’s basically an earthenware dish with a tight fitting, cone-shaped lid. During cooking, that lid catches the rising vapor and condensation and allows it to drip back over the ingredients making them extra juicy and flavorful.

Yours truly was NOT able to haul an authentic tagine back from Morocco, hello, carry on only for life. So I did it with the next best thing, a skillet and a lid. A tagine is on my list of things to purchase one day! Until then… I gave it my Gaby spin and it’s delicious! Make it – you won’t be disappointed!

For the entire Moroccan dinner party spread – here’s the full menu for you! 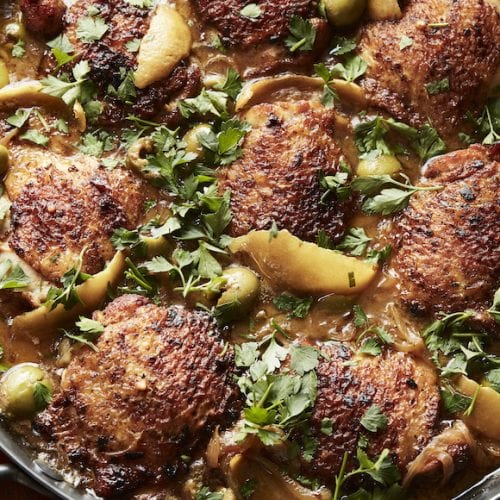