There really isn’t a day that goes by without me craving some form of a potato. These days, I’m all about the Crispy Potato Latkes which is fitting as Hanukkah starts today!

Can someone confirm that I’m not alone in my potato addiction? It really comes out to shine when it’s cold out because I can’t think of anything I’d enjoy more than roasted potatoes, french fries, baked wedge fries with bacon or latkes! Basically anything that is starchy, crispy and warm. The best!!

Latkes are my latest obsession and my box grater has been getting a work-out as I grate potatoes on a daily basis. I topped these with all sorts of delicious combos – but any way you serve it – you can’t go wrong! One quick note – ditch the olive oil when it comes to frying latkes. They cook for a few minutes so you need something with a high smoke point. Vegetable oil or grapeseed oil are my go-to’s.

A few of my favorite topping combos for what to put on a Crispy Potato Latke: 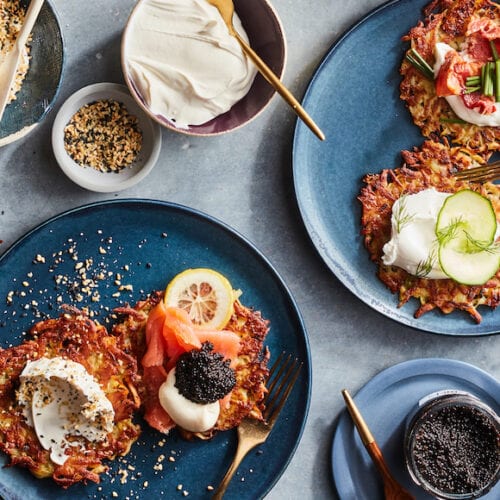 5 from 1 vote
These Crispy Potato Latkes with a Topping Bar are truly the perfect way to usher in Hanukkah! Or if you're potato obsessed like me, make them anytime during the year!
Serves 8 people
Prep Time 15 mins
Cook Time 10 mins
Total Time 25 mins
Print Recipe Pin Recipe Review Recipe